Using my son as a great excuse to get out and fish, I bought him a season downhill mountain biking pass to Winter Parks Trestle Bike Park.  I don't know the area well, but figured dropping his butt off at the hill is a great excuse to explore some small creeks around the WP area.

There are more options now (in June) than there will be later in the summer as these creeks get low and warm.  I can assure you that St Louis Creek was not warm - as my legs were frozen immediately as I started wet wading - and it was flowing pretty darn good too.

No rush to head up there - as the mountain didn't open until 10am - he got on the lift right at 10am, and I waited for him to come down one time to make sure he was good.  It took about 20 minutes, but he was down and I reloaded him with Honey Stingers and he was on his way back up.  I headed out to fish. 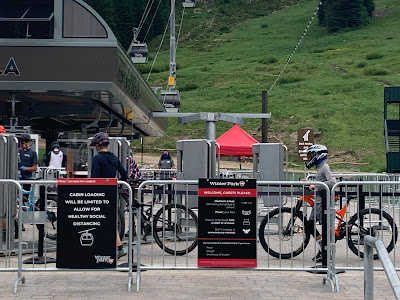 I had been to St Louis Creek probably 16 years ago (I remember we had Cabo when we camped there - but no kids!).  It is such a cool area.  Lots of hikers, mountain bikers and campers using the public lands - I really liked the treed areas that make it easy to hike in.  I parked just before the campground - there was 25 cars in the parking area.  I could see the blue line on the map just parallel to the road - so knew it was a hundred yard hike in.  I wet waded - put on my boots, rigged the rod and hiked in.  After a short hike and some short bush whacking, I was on the creek.

Beautiful (cold) water, bushes on each side, about 15 feet across.  The creek was flowing pretty good - some great fast runs, slamming into cut banks and lots of bushes reaching down into the water with stick jams on the bend pools.  This makes for tough fishing - especially nymphing.  Dry dropper is the way to go.  Except when you can't see your damn fly!  I tied on a medium sized hopper - but couldn't see it in the fast water - so switched to an indicator.  The fish were in the slower water - which was around every bend - but you had to work for it.  All the snags and any weight on the flies had them dragging in the shallows.

The most fishy spot I saw gave up 4 or 5 quick fish - this is the first fish below.  A nice 8 inch brookie who was all prettied up.  I hooked a bunch of tiny fish in this hole - but they have a way of freeing themselves with all the wiggling they do - especially on barbless hooks.  They all crushed the size 16 chartreuse zebra midge. 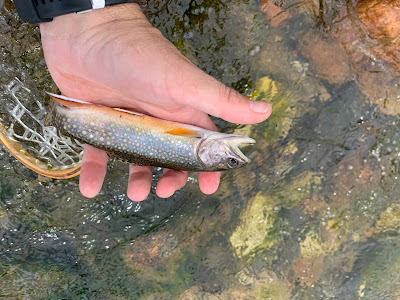 Mountains on all sides - such a nice view. 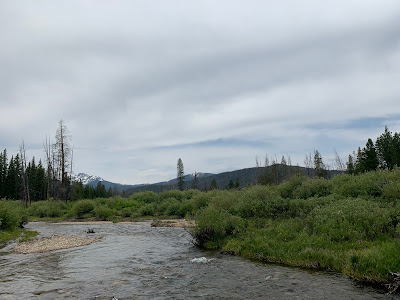 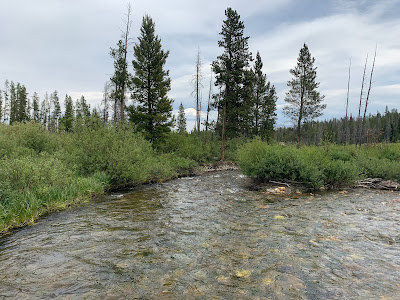 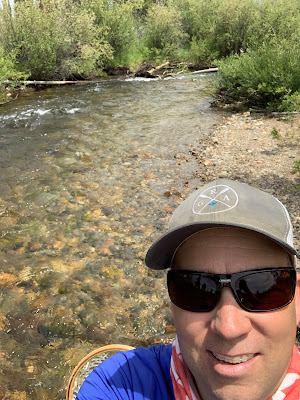 Another great fish - this one was about the same 8" - but he had brilliant red fins - I have never seen one with such bright red.  I tried for another picture - but as you can see, the net holes couldn't hold him. 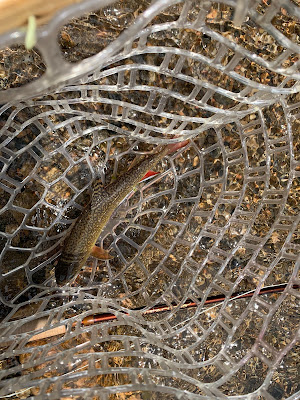 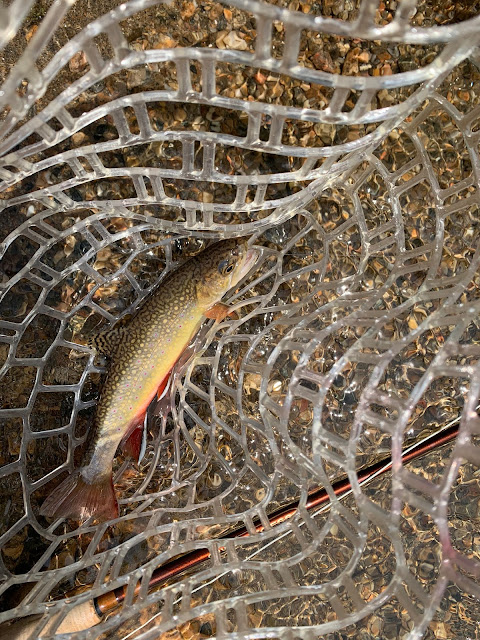 I did get blown off by lighting - there was thunder in the background, but I wasn't moving unless it rained or if there was lightning.  There was both - so I headed back to the truck.  The rain came down hard (as it always does in the mountains) and I changed and headed out.  Stopped for gas, then headed to the mountain.

I met Z at the bottom - he was having a blast, but hot - so started peeling off layers.  Z was waiting out a lightning shut down of the lift - but after 15 minutes more they re-opened and he was up the hill again. 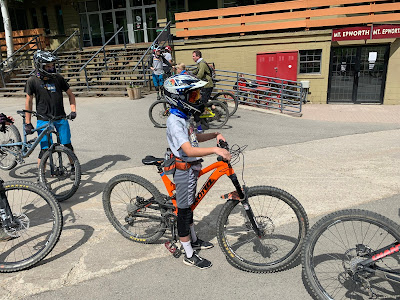 I went back to the truck and broke down the rod.  Then went and got a beer and sat on the swings waiting on Z.  He did 3 more trips before the 5pm closure. 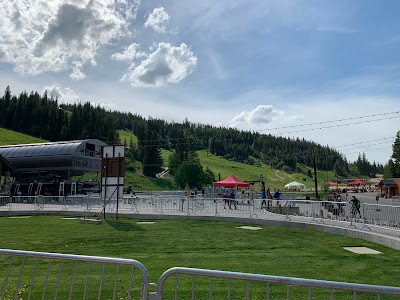 We stopped at the brewery in WP - Hideaway Park and got some cans to go.  The ride home was sketchy at the top of Berthoud with huge drops and winds - but it was good on the other side and we didn't hit any traffic - home by 6:45.  Not too shabby!