Amongst all the craziness that we have going on, fishing always seems to bring back some normalcy, some peace and quiet and comfort.  I am hoping that everyone is safe and spending time with their families.  I'd also like to thank those people that are out there in essential service positions, putting their health on the line and working to ensure that there is some sense of normalcy in this world.

On Saturday, we headed up to Jaye's lake in Bailey with the entire family - mainly to just get out of the house.  We were surprised to see that there was no ice on the lake.  It had snowed the two days before, but I would assume the full week before that it was 50-60 degrees, much as it was here in Denver - and that killed the lake.  We explored some of the property - and showed Jen and Avi where the house will be built.  Jen had a call at 1pm, so we didn't stick around long - especially since there is no cell service up there - or anywhere using Verizon in Bailey. 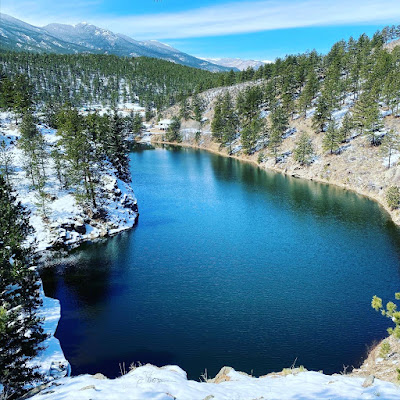 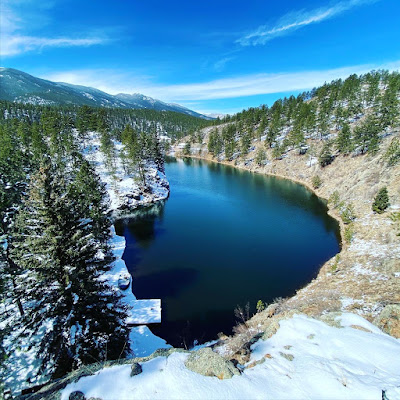 I was excited to head back up there on Sunday.  Z and I headed up around 10am, stopped and got gas in Bailey and was there by 11am.  It takes about 48 minutes from door to door.  Morning was chilly, so I got a fire going in the shed, put on our waders, got the canoe out and paddles and rigged Z's new spin rod. At about 12pm we were finally ready to actually fish - I was showing him how to cast the little mini spin rod right off the dock and on the second cast I hooked a pig.

This is Z trying to wrestle him for a picture.  He was easily 18 inches long and fat as a pig - these fish eat well. 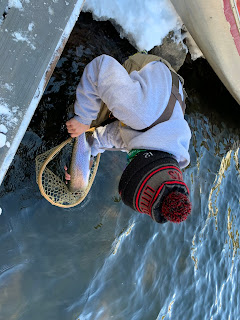 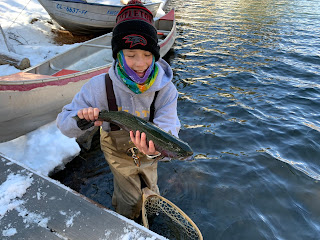 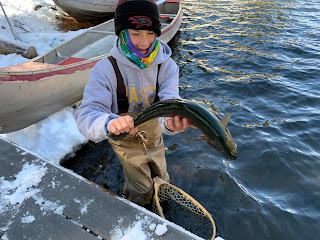 I got the canoe out and was paddling around - but the wind would push us to the rock ledge.  Z trolled the spin rod and hooked up with another fish - he slammed the little neon spinner we were using. 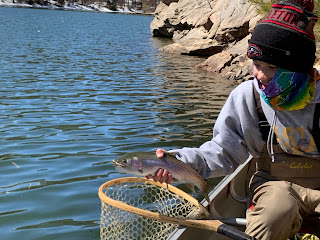 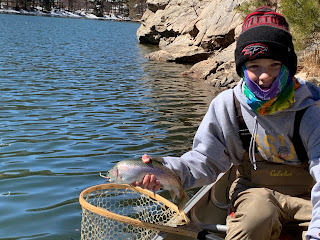 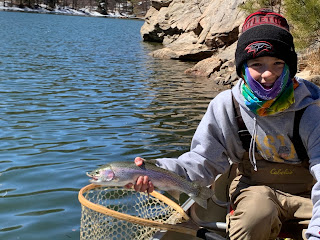 I couldn't keep the canoe straight so we decided to anchor up.  I rigged the fly rod and started fishing.  Z kept himself busy shooting the BB gun at bubbles and the shoreline.  He also was "fishing" with the big magnet we bought - he had it on a rope and would lob it into the lake and reel it back in.  After many empty attempts he ended up catching an old bolt - it was 4 inches long and 1 inch wide, rusted, and it looks like it had a square nut on it - so we will have to see if we can figure out how old it is. 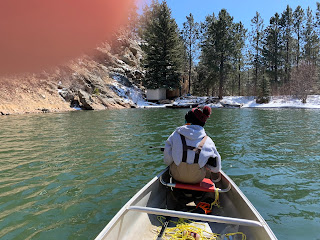 I did manage a few fish on an indicator - all on a three fly rig - but the top fly was a grey squirrel leach with a long micro rabbit zonker tail.  The fish would crush it.  I wasn't killing it - but every 10 minutes or so I'd catch a fish.  They didn't fight extremely hard - but flopped around in the net.  It is hard to take pictures in a canoe and hold a fish - so I did my best.  The fat one below was that same size - like 17 inches and fat as hell! 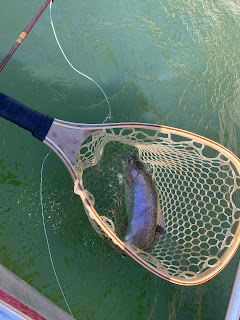 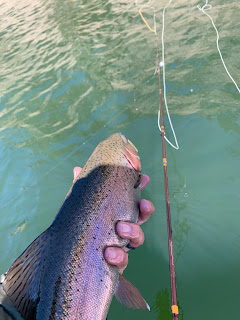 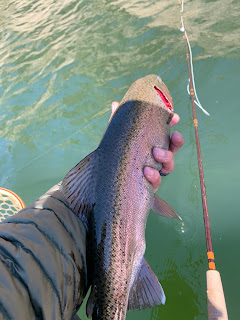 After non-stop wind and having to go pee, we headed back to shore and parked the canoe.  We just hung out on the dock the rest of the day.  The dock was covered in snow - so we cleared it off and the solar panel - so the batteries started charging again.  I didn't try to move the dock as the battery was dead in the morning and it felt like it was still frozen to the shoreline.  We just fished off the dock adn Z shot the BB gun. 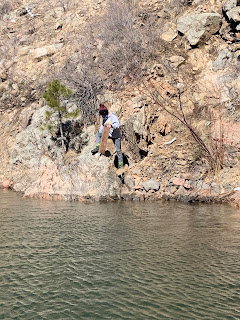 Z did a lot of exploring - hiking up the cliff wall to find a short cut to the house area - not much of a short cut if it is straight uphill and sketchy footing.  He would take soda cans that had almost exploded from the cabin and put them up on the hill and shoot them with the BB Gun.  He's not a great shot - but eventually he hit the ans and they'd explode.  I had a better idea for beer cans, sitting in the snow like a cooler! 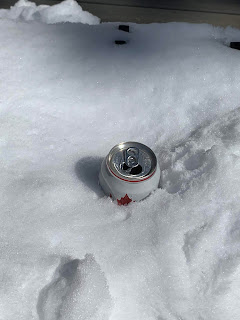 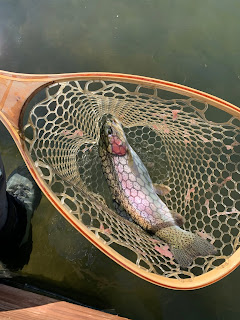 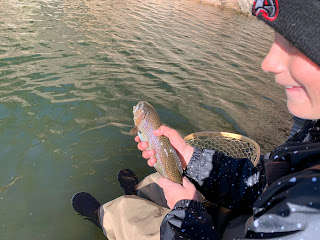 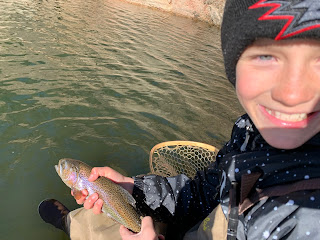 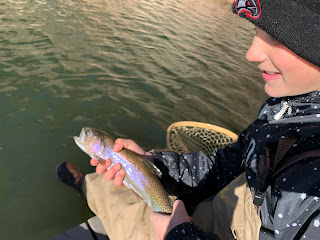 We wandered the property - cleaned off the lower solar panel to get the batteries charged in the cabin.  The lights were working later in the day - which is good.  We would run inside to warm our hands or feet at the wood stove.  We would on and off again fish - the last fish was a tank, another 18 incher - this one on one of those size 14 jig hooks with simi seal black dubbing all combed out with a red bead.  He crushed it.

At around 5:30pm it was getting chilly, and we left.  We hit Subway at the gas station in Bailey, and headed over to Jaye's other property - but the gate was locked and he wasn't there - so were turned home and were back by 6:45 or so.  It was good to get out - and I suggest you all do the same. Find a place to "social distance" yourself with a fly rod.