I had the opportunity to do back to back days of floating with Jaye and his brother Todd out at Pumphouse.  We had been talking about doing it, but hadn't planned a date until about a month ago when we finalized it for this weekend.
Todd was coming from Greeley and Jaye coming from Littleton, so we drove together.  We left around 10am on Saturday and were up in the mountains at Pumphouse around 1:30pm (after a stop for gas and a life jacket).  Pumphouse was packed due to it being one of the last weekend's of the summer, a Gore Canyon kayak race and the big shindig down at Rancho was this weekend.  We drove over to the over flow parking lot, found Todd, set up the trailer, inflated the two pontoon boats and ran shuttles to Radium.  We were on the water around 3pm and floating. 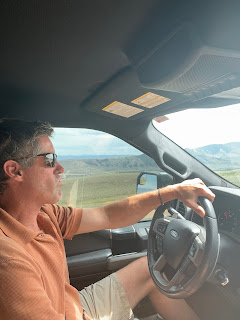 Being the maiden voyage - and floating unknown territory, it made it much easier to know that little kids were floating down the river without parents, and people were floating on SUPs - it put any fear of huge rapids or drownding out of our minds.

The weather was perfect, if not a bit hot.  The wind was down most of the day.  Jaye started rowing first - and not far after boat launch 3, I hooked up and landed a whitefish (probably about 17 inches - with a huge girth).  We continued our float and caught a few more fish - stopping occasionally in the good spots.  Most of the water on the other side of the river was very fishy - so having a flotation device to get across the river is a huge plus.  The water was slightly off color, and probably in the 68 degree range.  We hit a stretch that looked amazing and we pulled a couple of fish out.

We continued leap frogging each other down the river, and after about a mile we finally hit Eye of the Needle - which at 1050 cfs is not scary at all.  After a few 3 ft rollers, which is not too scary in a pontoon, you are through the canyon.  We continued and passed the Radium hot springs, through some flat water, then under the Radium bridge to the boat ramp. 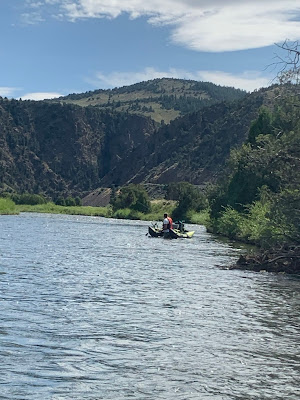 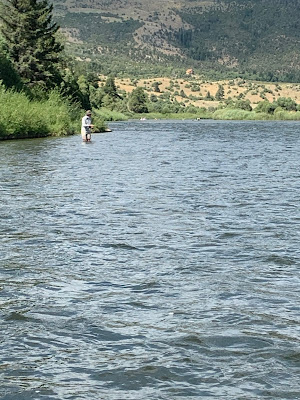 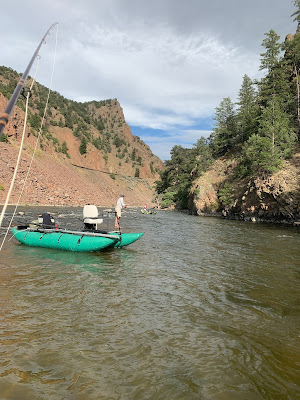 Back at the campsite the guys made an amazing pork chop, potatoes and green bean dinner - we killed off a ton of beers and were in bed by 10pm.  Jaye did make one modification to his trailer - he drilled a 2 inch hole in the floor - and used a 2 foot long PVC pipe as a pisser so in the middle of the night he didn't have to leave the trailer - he could get on his knees and pee into the pipe and it would drain just behind the trailer tire.

I set up my cot and bag and was out by about 10:30pm - sleeping under the perfect stars - with no light polution, you could see the Milky Way and multiple satellites.


Sunday was cold in the morning - around 40 degrees.  Since I slept outside, I was eager to get up - around 7am I walked down to Launch 2 and fished our old haunts.  The fishing was tough - lots of snags in the water as there always is there.  I did manage to hook up one nice rainbow on the pink wire worm. 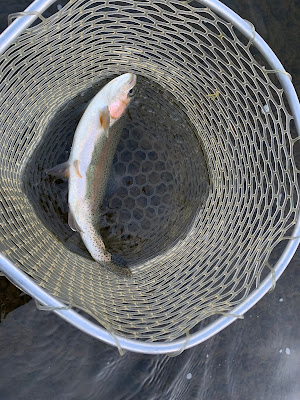 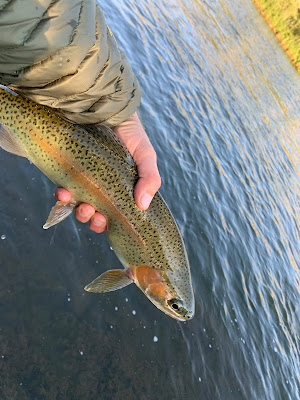 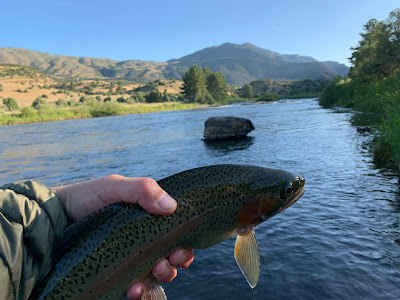 The guys woke up a little later, came and dropped off the pontoon boats at Launch 2 and then ran the shuttles.  While they were gone, I slammed this nice brown - probably about 17 inches on a Pat's Rubber legs - the only fish caught on the fly (and we had a bunch of rigs set up with Pat's, wire worms, eggs, stone flies, etc. - with minimal luck). 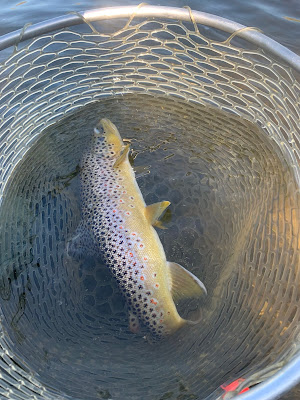 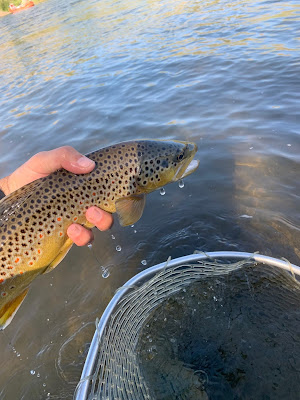 Today's float would be the same distance, but we could spread it over a longer period of time - the fishing (like the day before) was not lights out - in fact it sucked.  Probably 9 fish on Saturday and maybe 12 on Sunday.  The impressive thing was the fish the guys caught on these small telescoping spin rods with Panther Martins.  They would cast into rock walls or spin outs and the fish would follow or slam the lures - even smaller fish!  They'd catch fish in 4 inches of water and in rapids.  Jaye caught a fish as I was about to row through Eye of the Needle - he played it through the rapids and landed it on the other side.  Impressive.

Not being able to figure out what the fish were hitting was frustrating, we tried everything from streamers to hoppers, to worms/eggs/stones - finally I decided to try much smaller flies - and we started fishing some skinny water and I immediately picked up a little brown in a nice run.  But the small stuff didn't kill it the rest of the day.  I managed 2 more fish on the rig, but that was it. 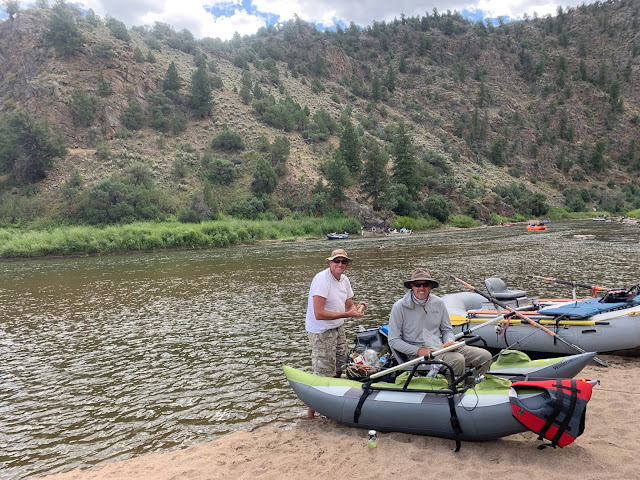 Here is the entrance to the canyon.  The boys stopped and had lunch on a huge sandbar - where there were about 40 people - some playing volleyball or ring toss, others were just having a beer, while a huge group of SUPers pulled in and had a beer. 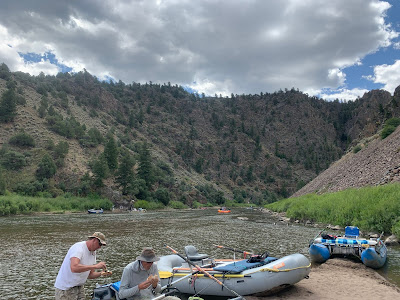 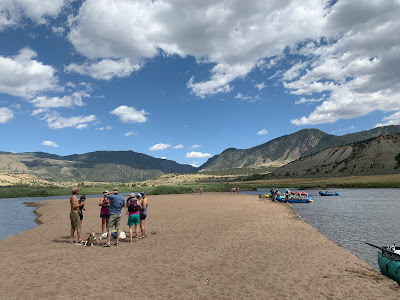 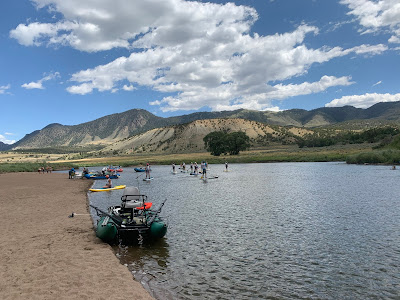 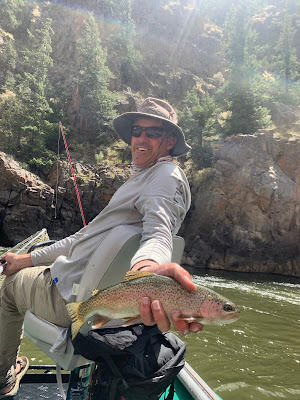 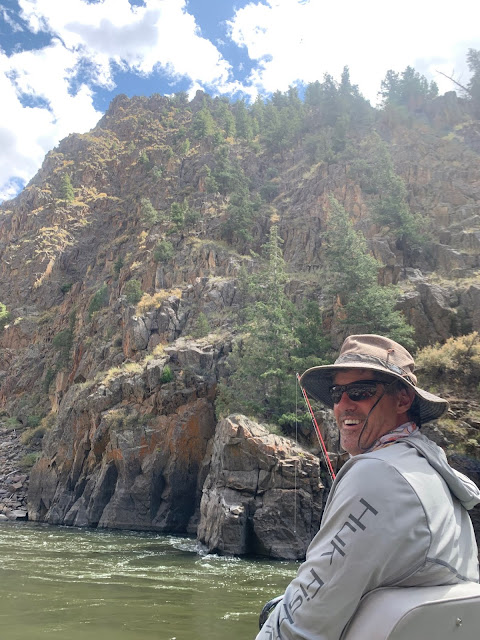 We pulled out at Radium at around 3:30 - deflated everything, put it in the trailer and we were on the road by 4pm.  We got back to Denver around 6:30pm.

What a great trip - even if the fishing wasn't great, we still had a great time and had great scenery.  It also got us thinking about other places we could float - Blue below Green Mountain?  Arkansas?  Roaring Fork?  North Platte?

Thanks again Jaye and Todd for including me in your crazy adventures!
Posted by Brandon at 4:49 PM